By Changing Nothing, Nothing Changes

‘The measure of intelligence is the ability to change.’ – Albert Einstein

‘The price of doing the same old thing is far higher than the price of change.’ – Bill Clinton 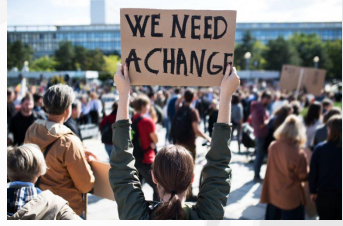 Change is a funny thing.

Sudden and drastic change can challenge the human psyche’s perception of self-determination and control. The importance of that perception is no better illustrated than by self-determination being a cardinal principal of modern international law, a jus cogens rule, from which no derogation is tolerated.

The world is currently experiencing its biggest change in a generation. Individuals’ relationships with their surroundings, with governments, and with each other have changed immeasurably, and likely permanently. As far as democracies are concerned, curfews and lockdowns were previously the stuff of Orwellian myth; he continues to look prophetical.

The global economy, and the businesses operating within it, have been affected in ways that before this year would have been unimaginable. The hospitality, leisure and travel industries in particular, that rely on the free movement of people, have been significantly impacted. But, the human ability to adapt never fails to amaze, and those companies in the worst affected industries that have been able to pivot and change, in light of their new environment, are surviving, and in some cases flourishing. Those that shut up shop and are waiting for a return to normal, in many instances, will not be reopening.

It is this ability to pivot and make changes, often small, in order to make things work in new environments, that will surely be one of the good things to come from an otherwise miserable year, and it is something that can be applied in the relatively niche world of derivative finance also.

The pricing environment for autocallables has deteriorated significantly in recent years as rates have come down, credit spreads narrowed, volatility fallen to all time lows before a brief spike this year, and now even previously sacred dividend forwards have been slashed. It must be noted that this deterioration in pricing is not exclusive to autocallables, one only has to look at the bond market to see how little one can now expect to be paid relative to recent history.

However, investors can look to be similarly nimble and use slight changes to flourish in this new environment: 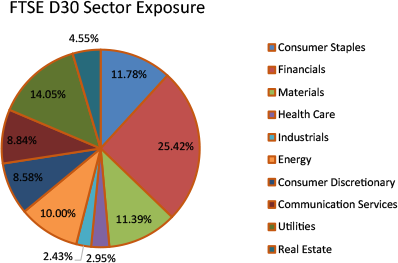 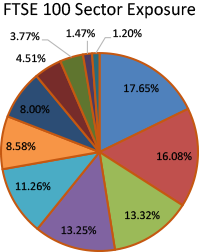 As one would expect, there is a higher weighting towards financials, utilities and energy, which tend to be higher dividend payers. Similarly, there is lower exposure to consumer staples, healthcare and industrials.

The 30 stocks that currently comprise the index represent 40% of the total market cap of the FTSE 100 Index.

This gives the index an attractive trait, in that a stock will enter the index upon its dividend yield increasing, which is either a function of the company increasing their dividend (positive), or from the stock price falling. Therefore, the index is likely to naturally increase weight towards cheaper stocks over time.

Falling volatility and dividends have had a significant impact on the pricing environment for autocallables. The FTSE D30 Index has a significantly higher dividend yield and slightly higher volatility than the FTSE 100, giving a sizeable relative pick-up in coupon:

It’s high correlation to the FTSE 100 means that investors are not dramatically changing the risk and return profile of any structure that would ordinarily have the FTSE 100 as its underlying in order to capture this excess return.

Turn and face the strange…

Past performance is not necessarily a guide for the future. Forecasts are not reliable indicators of future performance. The value of investments, and the income from them, can go down as well as up and the investor may not get back the amount originally invested. The data is as at the date of this document and has been reviewed by Fortem Capital Limited.

“NOTICE TO INVESTORS DOMICILED OR RESIDENT IN
SWITZERLAND – The interests in the UCITS Fund and any related services, information and opinions described or referenced in this document are not, and may not be, offered or marketed to or directed at persons in Switzerland (a) that do not meet the definition of “qualified investor" pursuant to the Swiss Federal Act on Collective Investment Schemes of 23 June 2006 (“CISA") (“Non-Qualified Investors"), or (b) that are high net worth individuals (including private investment structures established for such high-net worth individuals if they do not have professional treasury operations) that have opted out of customer protection under the Swiss Federal Financial Services Act of 15 June 2018 (“FinSA") and that have elected to be treated as “professional clients" and “qualified investors" under the FinSA and the CISA, respectively (“Elective Qualified Investors").
In particular, none of the information provided in this document should be construed as an offer in Switzerland for the purchase or sale of the interests or any related services, nor as advertising in Switzerland for the interests or any related services, to or directed at Non-Qualified Investors or