‘In front of excellence, the immortal gods have put sweat, and long and steep is the way to it.’

‘Alexander Hamilton started the Treasury with nothing, and that was the
closest our country has ever been to being even.’

‘People call these things imperfections, but they’re not, that’s the good stuff.’ 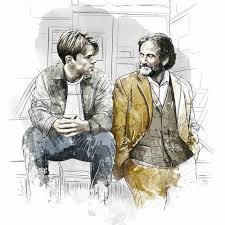 Inflation has captivated investors in 2021 as, for the first time in more than a generation, what was previously a conspiracy theory purported by crackpot economists has re-emerged. In June 2020, the likelihood of this inflationary burst occurring was discussed in Definitely Maybe Heading for an Inflation Supernova. Whether the current, stubbornly non-transitory, spike is indeed the beginning of a secular supernova remains to be seen, but the probability of such a scenario has undoubtedly increased over the past 12 months.

Inflationary concerns have brought yield curves of government bonds into focus. It is arguably clear that most market participants have never had genuine inflation to contend with, given the erratic moves being seen in the market currently. Of particular interest to investors is the US Treasury Yield Curve which, because of the underlying market’s sheer size, tends to drag others with it.

The US Treasury Yield Curve

The Federal Government funds its obligations by virtue of Treasury-issued debt. This debt is spread across maturities; short term bills (3m – 1y), medium term notes (2y – 10y), and long-term bonds (20y – 30y). The curve plots the current yield at the various maturities and the shape of the curve gives an indication of expectations about future monetary policy as well as economic growth.

Liquidity Preference Theory states that the curve is typically upward sloping due to investors demanding a premium for the relative illiquidity of longer-term maturities. Typically, an inverted curve has been seen by investors as a horseman of an impending recession; the 2s10s spread turning negative (2-year yield higher than 10-year yield) has had a particularly good predictive record.

Recent weeks have seen severe flattening across yield curves. Unusually, it has been some of the smaller government bond markets leading the US, as hawkish moves and tones from the likes of the UK, Australia and Canada have dragged short term rates higher, in spite of the Federal Reserve’s insistence that inflation is transitory and that an aggressive hiking cycle will not be needed. Of equal note is the softening at longer maturities as investors price in lower growth in the coming years. There were some well documented casualties amongst hedge funds employing the popular ‘steepener’ trade, and their forced liquidations exacerbated the flattening. 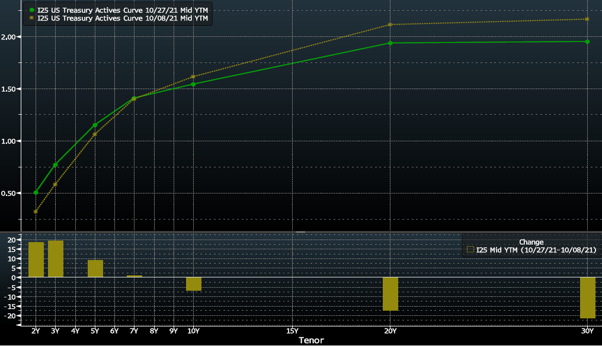 The Treasury market is taking the Fed’s transitory inflation narrative at face value. Pre-GFC, investors required a healthy premium in the 5-year yield against CPI. Since then, it has more or less tracked CPI, the exception being when the market correctly predicted that the deflation brought about by the oil price crash in 2014/15 would prove transitory; yields did not move in spite of CPI’s dip. This year the market is similarly predicting that inflation will prove transitory, the difference being that while in 2015 investors were rewarded in real terms (yields were above inflation), this time the real yields have turned highly negative:

The burning question is whether the yield curve is correctly priced.

What Next For Inflation

One of the major transitory arguments of ‘base effects’; the fact that year-on-year numbers were, at the beginning of the year, referencing a severe deflationary shock, has been revised as high prints have continued to come. Another argument, particularly with regards to commodities, was the replenishment of reserves that were depleted in the aftermath of the crisis. However, commodity price rises have proved similarly stubborn, and reserves are not yet fully replenished. Some of this is down to supply chain issues, but the structural vulnerability of supply chains that has been shown is in itself inflationary.

Other things to note, as have been noted here previously, are the world’s changing demographics, namely an ageing population. In addition, increasingly progressive mandates of governments around the world, particularly with regards to green policy and reducing inequality. In the case of the US, spending plans are akin to wartime, including infrastructure, the green transition, and direct injections of cash into the real economy through stimulus cheques.

The debate around whether inflation is transitory will continue to rage, possibly for long enough that one might question whether a reasonable definition of how long transitory is has passed. One simply cannot come down on one side or the other with complete confidence. However, the probability ascribed to stickier secular inflation must have changed given the seismic policy response and fundamental shift of the past 18 months.

Aside from the inflation argument, investors are potentially looking through an important supply side factor in the US Treasury market; increasing net supply, and where that supply is occurring in maturity terms. Average net issuance of short-term bills since June 2020 has been -$76bn whereas in terms of longer dated notes and bonds the number is +$210bn. It was always likely that issuance would move to longer dated maturities, it is relatively more stable debt. Longer dated issuance also serves as a neat hedge against policymakers’ own assumptions about the transitory nature of the inflation – it is for readers to make their own minds up whether anything should be read into the fact that issuance of TIPS has come down significantly, whilst the Fed’s own TIPS holdings have trebled; perhaps they are not as confident on inflation’s transitory nature as they say…

Whether they are right or wrong, the wall of treasuries that are needed to fund the Biden administration’s spending plans, coupled with the potential for $80bn per month of purchases through QE to be tapered off, may mean that longer term yields must rise materially for purely structural reasons.

These structural factors, coupled with the potential for a generally less favourable mix of growth and inflation, and whatever macroeconomic headwinds and shocks are bubbling below the surface, are likely to mean that the goldilocks regime for the traditional 60/40 portfolio is less likely to be repeated. The price risk for yields looks to be firmly to the upside, and therefore for bonds to the downside (yields and bond prices move inversely).

The global economy finds itself in the midst of the greatest monetary and fiscal experiment in its modern history; this time genuinely is different. Whether it plays out in a way that is detrimental to traditional asset allocations remains to be seen, but the risk of it doing so must be something investors consider as policy looks to be entering a new cycle.

– This document has been issued and approved as a financial promotion by Fortem Capital Limited for the purpose of section 21 of the Financial Services and Markets Acts 2000. Fortem Capital Limited registration number 10042702 is authorised and regulated by the Financial Conduct Authority under firm reference number 755370.
– This document is intended for Professional Investors, Institutional Clients and Advisors and should not be communicated to any other person.
– The information has been prepared solely for information purposes only and is not an offer or solicitation of an offer to buy or sell the product.
– Data is sourced from Fortem Capital Limited and external sources. The data is as at the date of this document and has been reviewed by Fortem Capital Limited.
– Information, including prices, analytical data and opinions contained within this document are believed to be correct, accurate and derived from reliable sources as at the date of the document. However, no representation or warranty, expressed or implied is made as to the correctness, accuracy or validity of such information.

– Fortem Capital Limited assumes no responsibility or liability for any errors, omissions or inaccuracy with respect to the information contained within this document.
– All price and analytical data included in this document is intended for indicative purposes only and is as at the date of the document.
– The information within this document does not take into account the specific investment objective or financial situation of any person. Investors should refer to the final documentation and any prospectus to ascertain all of the risks and terms associated with these securities and seek independent advice, where necessary, before making any decision to buy or sell.