‘The secret to modelling is not being perfect.’ – Karl Lagerfeld

‘I’m no model lady. A model’s just an imitation of the real thing.’ – Mae West

What is this? [smashes the model for the reading centre] A centre for ants? How can we be expected to teach children to learn how to read… if they can’t even fit inside the building?

Derek, this is just a small…

I don't wanna hear your excuses! The building has to be at least… three times bigger than this!

At a time when every aspect of life is being governed by the output from various models, it seems apt to talk about one in particular that has had a marked effect on the structured product industry so far this year

Dividends as an asset class

It was not too long ago that a dividend was something that came in the post as a welcome distraction from the pile of letters demanding one payment or another. Not only do dividends no longer tend to be delivered in paper form, but their role in the financial system has also evolved significantly. Derivatives now give investors the opportunity to gain exposure to dividends without actually owning any of the associated shares; dividends have become their own asset class.

Dividends with regards to structured products

The majority of structured products purchased in the UK are autocallables. An autocall gives the investor exposure to a set of pre-defined payoffs, if certain pre-defined conditions are met. These conditions are linked to the performance of underlying securities or indices.

At the beginning of the product’s life, the investor will be long delta (sensitivity to the underlying securities or indices), short volatility (due to holding a net short position in options), and short dividends (as the underlying is referenced in Price Return rather than Total Return terms). Therefore, the bank issuing the product will take the opposite side of the above, including being long dividends.

It is not the role of a bank to be a dividend storage facility, so they will naturally hedge out this long dividend exposure, effectively by selling them. But they will have to estimate what level the dividends will be for different market levels and the different years associated with the product.

Where do those estimates come from?

A couple of things to note about dividends:

1. It is seen as a positive signal to the market for them to be stable + vice versa
2. They tend to be directly related to a company’s most recently available financial report

Clearly it is therefore easier to predict dividends to be paid in a year’s time, and these tend to be modelled as constant, the idea being that companies will exhaust all other options before cutting their dividend in the near term. Longer term they are modelled more in line with equity market levels.

One can see this model working well during the Eurozone crisis of 2011: 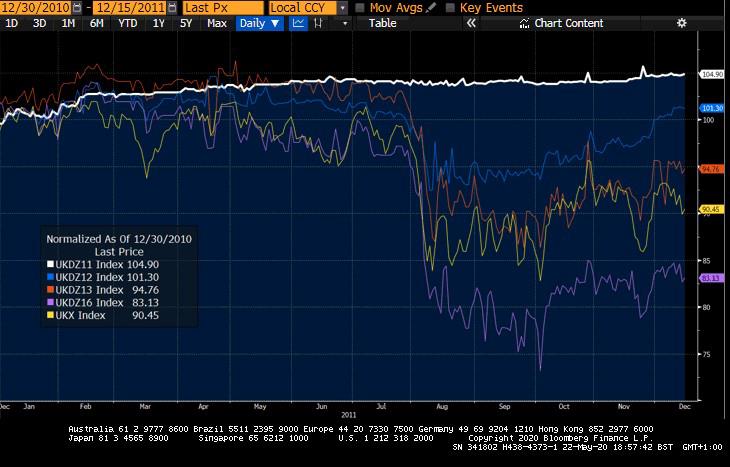 Roll on 2020, and not for the first, nor likely the last, time models have found things much harder to predict:

This creates a problem for the bank hedging for two reasons:

A combination of the fact that implied dividends that had already been purchased, but were yet to be voted when the crisis hit, as well as significant political pressure thereafter, has caused many dividends that were thought a lock for this year to be cut or cancelled all together. The FTSE 100 2020 dividend futures (UKDZ0) have sold off heavily as a result, and this has caused significant mark to market losses on the banks’ dividend books. In addition to this, as the market sells off, the banks’ dividend exposure increases, so they need to sell more dividends to hedge; not an issue so long as they will be selling at levels at or around where the model predicted. However, if one is selling at a discount of over 40% to where it was thought (the dashed white line), further losses can, and have been, racked up.

Models are great, but mind your eye if you are wedded to one.