‘I didn’t discover curves, I only uncovered them.’ Mae West

‘Those are things we would look to, to stop going up and ultimately decline as these situations resolve themselves.’ Jerome Powell – testimony before congressional oversight panel, June 2021

Commodities are very much back in vogue.

After falling more than 25% in the midst of the Covid-19 crisis, the Bloomberg Commodity Index (BCOM) has since been on a meteoric rise of over 50%, stoking fears of inflation for those looking at price increases in actual ‘things’.

Of equal note is the shift in the shape of many of the futures curves of the individual commodities that make up BCOM. A significant amount of the risk premia universe is centred around curves; the shape of curves and shifts in the shape of those curves. Investors are able to largely hedge themselves against parallel shifts up or down in term structure, while taking on the risk of shifts in term structure over the short term in order to earn a premium over the medium to long term. Commodity curve trades are an example of a classic, structural risk premia: 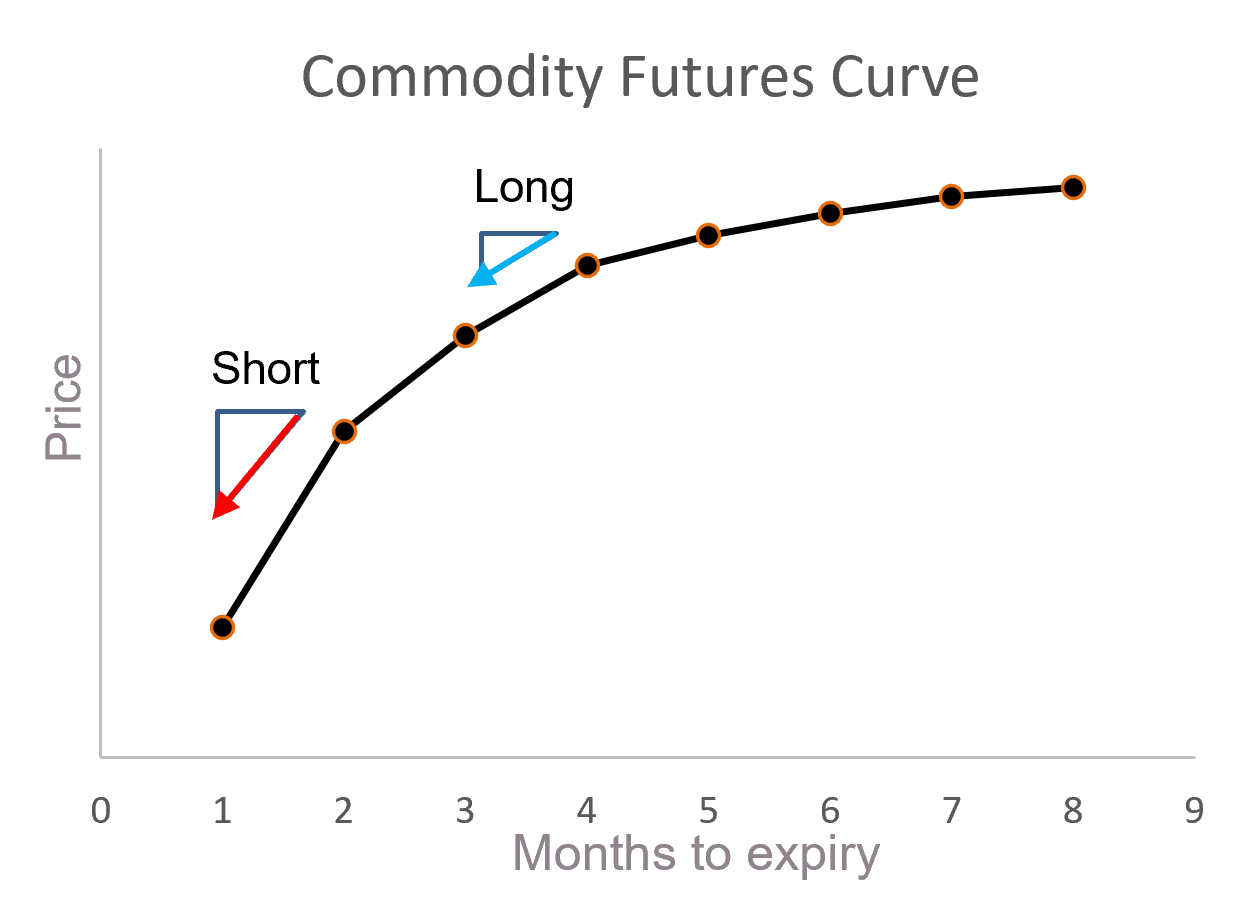 Commodities themselves tend to be accessed through futures. The shape of the futures curve tends to be upward sloping, or what is known as in contango. That upward slope is predominantly the result of the cost of owning physical commodities, much of which is storage. Therefore, the further out on the curve one goes, the more cost one is effectively transferring onto somebody else, a cost that must be paid. And like with most rents, short term rent is more expensive than long term rent, so the curve is concave rather than a straight line. Since the curve is not straight, there are contracts that have more negative roll as they move towards expiry than others. This allows strategies to be constructed that are short the contract with the most negative roll yield, and long that with the least, meaning a net positive roll yield can be made, crucially, while being insulated from parallel shifts up or down in the term structure. This persistent return is structural, based on the physical make up of the market, and uncorrelated to traditional asset classes

While the strategy, as with many curve strategies, can be constructed in order that it is insulated from parallel shifts in term structure up or down, the investor does take on the risk of a change in the shape of the curve, which can be to the strategies’ benefit or detriment.

However, it is important to note that shifts in the shape of the curve only drive shorter term returns. Over the long term, the changes in timespreads (difference in price between futures contracts of different tenor eg September 21 vs December 21) average out, and the persistent long term return is driven by the natural concavity of commodity curves. But, over the short term, changes in the shape of the curve have accounted for 50 – 75% of the daily moves in commodity curve strategies.

Those strategies benefitted in early 2020 when the pandemic and ensuing crisis sent commodities, illustrated by BCOM, into ‘super contango’, in other words the spot and shorter tenor futures’ prices fell more than those of longer tenors – the front of the curve fell more than the back.

Fast forward less than a year and BCOM has travelled from near record contango to near record backwardation:

This journey of travel has seen spot and front month futures’ prices violently re-rate upwards, far quicker than the longer end of the curve, to the extent that, on average, commodity curves now sit at levels of backwardation that do not come along very often. This record speed of curve shift has been a significant headwind to commodity curve strategies over the past year, as intuitively would make sense; the investor has been short the part of the curve that has outperformed and vice versa. But, what is interesting is where this leaves the strategy looking forward.

The outlook from here is likely to be pretty good for a number of reasons:

Speculator positioning is extremely long in commodities, which is fine until said speculators want to sell and there is no bid on the other side of the trade. Typically, extreme net long positions mean that any catalyst that brings downward price pressure at the front end is greatly exaggerated.

Secondly, the huge rally in the front end of the curve over the past year may have left them in a place where timespreads have gotten ahead of fundamentals when one looks at the inventory cycle for a number of the underlying components of BCOM. Ordinarily, one can rely on an inverse relationship between timespreads and inventories; many timespreads are stretched to the point of implying shortages where there are none, particularly in the case of energy.

Finally, as previously mentioned, contango or concavity is structural for most commodities over the long term due in the main to the cost of storage being more expensive for shorter periods than longer.

These factors have tended to mean that historically commodity curve strategies tend to go through periods of strong performance in the aftermath of extreme backwardation as curves normalise back  into contango, and in fact some of the highest returns have been realised after periods of highly stretched backwardation such as those currently being experienced.

The fact that commodities’ natural home largely resides in contango is also the reason why commodity ETFs tend to be poor trackers of spot commodity prices: 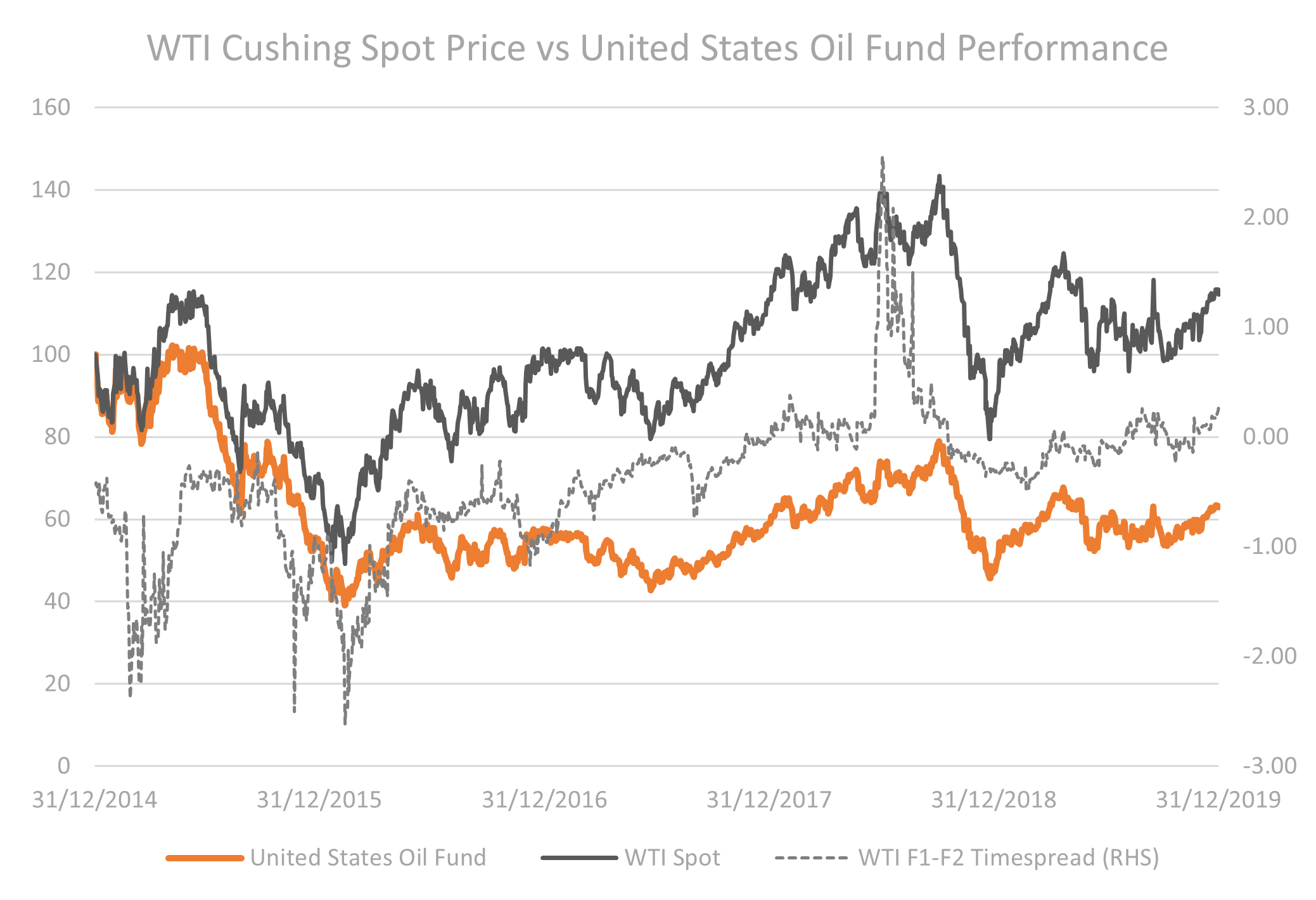 Looking at the period 2015-2020, during which WTI was in contango for the most part (as illustrated here by the front two contracts’ timespread being negative), one can clearly see the bleed that constantly rolling down the curve causes for the ETF – buyer beware. Read the risk warning on the products for further evidence of the lack of tracking potential to the physical commodity.

Back to commodity curve, and in terms of implementation, there are numerous options available to investors. In Fortem’s own Progressive Growth and Alternative Growth Funds there are four separate implementations. The differences between them are possibly for a future GHTTG, but the premise of long term persistent structural returns driven by the long term structural natural shape of the curves is common to all of them.

The strategy is a long running staple of the risk premia / alternative beta space that has delivered uncorrelated positive returns historically, but the current environment of extreme backwardation may provide a particularly attractive entry point. Exposure has been increased in Fortem’s own Funds over the past six months, but strategies can also be accessed in note or option form for those investors wishing to invest in isolation.

– This document has been issued and approved as a financial promotion by Fortem Capital Limited for the purpose of section 21 of the Financial Services and Markets Acts 2000. Fortem Capital Limited registration number 10042702 is authorised and regulated by the Financial Conduct Authority under firm reference number 755370.
– This document is intended for Professional Investors, Institutional Clients and Advisors and should not be communicated to any other person.
– The information has been prepared solely for information purposes only and is not an offer or solicitation of an offer to buy or sell the product.
– Data is sourced from Fortem Capital Limited and external sources. The data is as at the date of this document and has been reviewed by Fortem Capital Limited.
– Information, including prices, analytical data and opinions contained within this document are believed to be correct, accurate and derived from reliable sources as at the date of the document. However, no representation or warranty, expressed or implied is made as to the correctness, accuracy or validity of such information.

– Fortem Capital Limited assumes no responsibility or liability for any errors, omissions or inaccuracy with respect to the information contained within this document.
– All price and analytical data included in this document is intended for indicative purposes only and is as at the date of the document.
– The information within this document does not take into account the specific investment objective or financial situation of any person. Investors should refer to the final documentation and any prospectus to ascertain all of the risks and terms associated with these securities and seek independent advice, where necessary, before making any decision to buy or sell.